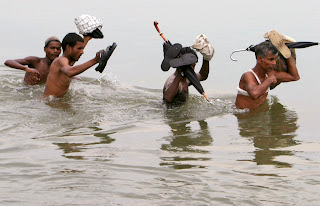 A staggering 16 million people - as much as the entire population of the Netherlands - have now been affected by flooding caused by heavy and sustained monsoon rains falling across South Asia. The floods are causing massive displacement of populations across Pakistan, India, Bangladesh and Nepal - bringing widespread destruction to homes, livelihoods and agricultural cropland.

According to the government in Pakistan - déjà-vu from last year, when the worst floods in living memory wreaked havoc throughout the country -
five million people have been directly affected by floods which have struck areas across most of the country. During the last month intense rainfall caused flooding in 20 out of 23 districts in the southern district of Sindh alone, while areas of Eastern Baluchistan and Punjab Provinces have also been badly hit. Close to a million homes have been damaged or destroyed and the current disaster has left thousands without food and shelter. Over 140,000 displaced people are now living in temporary relief camps and the numbers are rising.

“We cannot fail these communities”, says Senator Nilofer Bhaktiar, chairwoman of the Pakistan Red Crescent, “For the past year we have struggled to help thousands to recover from the 2010 floods. Just as their crops were ready to harvest, the floods have come again and literally taken the food from their mouths”.

More rain to come in India 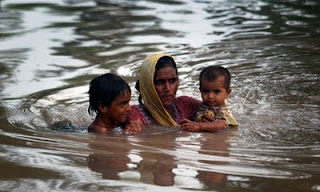 Heavy rains have also deluged many States throughout India, causing severe flooding which has resulted in large-scale population displacement in the north-eastern state of Assam and the northern states of Bihar and Uttar Pradesh as well as in Punjab and West Bengal. Entire communities remain marooned in some areas as flood waters have made it almost impossible for search and rescue teams to reach them.
Current government figures estimate that over 300 people have been killed and 8.6 million people have been affected across five States since the start of monsoon season.
“The numbers of people affected have doubled in just a few weeks and there is more rain to come”,
says John Roche, country representative for the International Red Cross in India. “Thousands have lost homes and livelihoods leaving many wage-earners with no choice but to migrate to nearby towns to find work“.
The monsoon has also caused havoc downstream in Bangladesh rains where several major rivers have burst their banks. The floods engulfed vast areas spanning the length and breadth of the country, causing misery for over 1.5 million people.
Nepal too has suffered this year. This year’s monsoon rains triggered several flash floods affecting more than 2,600 families and claiming 90 lives, with 40 people reported missing.
/PC
Posted by Unknown at 3:15 PM