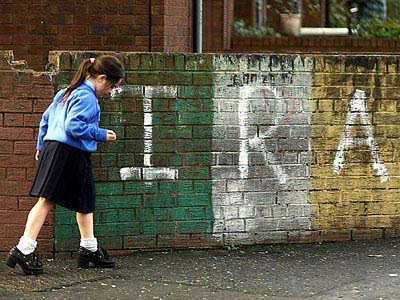 The 'troubles' in Ireland always loomed large in my childhood and formative years. Like most families we had our stories of victimhood from the War of Independence. The hunger strikes of 1981 that left ten men dead hardened my own  republican skin and  gave me a passion for history studies that served me well ultimately.
In college, I remember a great trip to Belefast accompanying a friend to carry out research as we photographed and decoded the urban landscape of murals which were all pervasive back then. In those days, the murals helped you stay on the right side of the tracks. And, in the rare instance where murals were absent, you navigated the invisible sectarian borders by observing what the pubs were advertising: Tennants for unionists; Harp lager for republicans.

After leaving college and taking up my first serious journalistic assignment I was to spend a year on the ground all over the six counties of northern Ireland documenting a violent period of our country's history. In those times things were ugly: tit-for-tat killings of civilians were such a regular occurrence that media hardly reported it anymore. "People are fed up with Northern Ireland" a UK journalist friend told me over a pint of Harp one night.
In March 88 in Milltown cemetery a lone loyalist gunman called Michaeal Stone opened up on a crowd of mourners (there to bury three unarmed IRA volunteers who had been executed by undercover SAS forces as they gathered intel on British troop movements on the Rock of Gibraltar). In the end three people died and upto sixty were injured and all of it caught on the assembled TV cameras. In the politics of paint in northern Ireland of that time, a mural sprung up hours later declaring: three birds with one Stone.
Then, a few days later, at the funeral of one of Stone's victims, two plain clothes British soldiers drove into the path of the cortege and were pulled from thier cars, driven away, and later found naked on waste ground beaten to death. Again, the whole episode was filmed live on tv (including the two soldiers being driven away in a Black Taxi) and the anger of the crowd and the barbarity of the killings underscored, if needed, how far down the spiral of violence we were in those bleak last days of the eighties.
Then there was the 'normal' stuff for journalists to follow up: allegations (and proof) of torture were rampant; internment was an accepted method of 'managing' the Catholic population; up to 30'000 British soldiers on the streets. In the area of Crossmaglen (known as Bandit country), where I spent many's a day and night back then, it was estimated that British soldiers outnumbered the local male population. What's more, the army had commandeered the local Gaelic football pitch to use as its base, much to the understandable annoyance of the locals. Helicopters constantly buzzed in the air and bodies were pulled out of ditches every other day.
In August of 88 I remember also eight British soldiers were killed by the IRA as they returned to their base. It upped the ante and tit-for-tat revved up, reprisal killings escalated and the fear and hatred became even more deeprooted. Nobody back then saw even a sliver of hope for calm or dialogue or peace. The political rhetoric was in full throttle and the tribal narrative of oppression and resistance was the language of the day.
In 1989 we followed the renowned Dr. Ian Paisley around his constituency for a couple of weeks. He had never allowed media get so close before and we produced an award winning reportage called: the 16th Century is alive and well and living in Northern Ireland. While we didn't find it in us to prase Paisley too much - he was generally carricatured as a venomnous rabble rousing Catholic-hater back then - we did pass him a back-handed compliment of sorts and labeled him 'the most consistent politician in Northern Ireland'. Our times 'up North' also gave us reason to meet with the likes of Ken McGuinness, Fr. Dennis Faul, Gerry Adams and Billy Hutchinson. 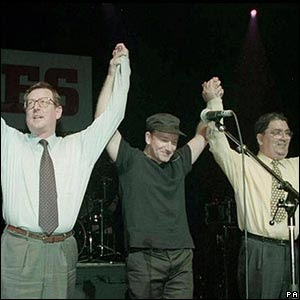 But, incredibly, ten years later, in 1998, bloody violence did give way as the seeds of peace were sown in the form of the Good Friday Agreement. This agreement sprung from a 1994 ceasefire declared and more or less honoured by the key paramilitary organizations (interestingly, this was about six months from the signing of the Oslo Peace Accords - a conflict resolution initiative that took an altogether different direction).
An amazing 94% of the population in the Irish republic voted in favour of its terms and also threw out a constitutional reference which laid claim over the entire island of Ireland. In the north of Ireland, some 74% voted for it, an even more amazing majority given that the balance of power was clearly with the unionists.
Alot of important concessions were made by politicians who, when it came to the crunch, really did give a damn and put their country's future ahead of their political ambitions. John Hume stands out as a towering figure in this respect. Ireland's greatest living Irish man for my money. But there were many others, including those gathered from the paramilitary circles, who opted for peace and led the charge for change.
The Agreement wasn't easy of course. Concessions never are. Many prisoners for instance with 'blood on their hands', including Michael Stone, were released back on the streets. But I think both sides just came to the realization that it was unwinnable. The death and division was not worth it and, importantly, the timing coincided with a real a political will in Belfast, Dublin, Washington and London. Once the activist Irish diaspora was on board the path to peace was suddenly visible, bumps and all.

So, eleven years on (even the same date, 10th of April) and the historic Good Friday agreement still sets the tone of peace in Ireland. It shaped a new era on the island and remains a benchmark for conflict resolution around the world. It is easy to forget just how bad things were in those dark decades. And more decades will be needed still to ensure that the seeds of peace become as deeprooted as the hatred which so recently dominated large sections of life and politics in Ireland.
The economic 'miracle' of the Celtic Tiger, despite all the hubris that came as part of that bulging package, was also a major factor in winning the peace in Ireland. As global financial crisis heralds a return to harsher economic times in Ireland - completely reminiscent of the high taxes, debt, emmigration and unemployment of the eighties - lets hope that the Good Friday Agreement is resolute enough to withstand any assaults that might sprout from the rapidly rising poverty, a despicable bedfellow of sectarianism.
Already in recent months there have been a few worrying dents to the upward trend of peace in Ireland. "Real IRA" and "Continuity IRA" have stepped out of the shadows picking off soft targets and even armed robberies are making a nightly comeback to the nine o clock news; an indicator that the economy is tanking and with it, possibly, a fertile ground for a return to violence dressed up as politics.
The Good Friday Agreement is a triumph in my mind. Peace and solidarity are always preferrable to murder and sectarianism. As we are tested economically in the months and years ahead lets hope that this remarkable piece of contemporary history is bolstered and supported by political will on both sides of the Irish Sea and that the will of the huge majority of the people of Ireland is the ultimate winner. Eleven years and counting, onward and upward (and head down eyes open).
/PC
Posted by Unknown at 7:24 PM