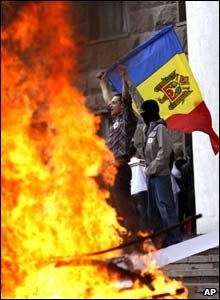 What is happening in Moldova now has resonances of what happened in neighbouring Ukraine five years ago. I happened to be based in Kiev at the time and got a call from Sky News Ireland to do a live piece to camera. I was told to look for a white satellite truck on the main square, where a Polish TV crew would sort me out. Halfway to the Maidan (man square) in Kiev I realised I'd left the Polish mobile number back at the flat, but carried on as I was going to be breaking my live TV cherry and I wanted to be fresh.

So I get to the main square, where about half a million people are packed in listening to president-to-be Yushchenko and PM-to-be Timoshenko on stage. Noise deafening, crowds gridlocked, and at least a dozen white satellite vans. None of which were Polish. I racked and racked my brains and suddenly it came to me: the 12-digit number I'd been given earlier that day, and had not committed, consciously to memory.

After half an hour of fruitless ringing an engaged number, and knocking on doors of Turkish, Spanish and many other TV crews I decided the only thing for it, on the cold evening, was to give up and head to O'Briens pub (where we had our wedding reception a year or so later) for a hot half one.

I pressed "redial" one more time and a little Polish voice answered.

"Do you speak English?"

Somehow we communicated in bits of Russian and English and he told me he was under the main screen. At the front of the square, heavily guarded, was the stage, with massive TV screens on either side. Waving my diplomatic card I pushed through security and found myself standing under Yushchenko's feet. My phone rings. My Polish friend. And he's shouting "Rainsford Rainsford" And I see it... across the square, through a throng of thousands, an advertising screen, with the word Rainsford under it.

Against the tide I pushed and squeezed and finally wriggled up a snowy slope, strangers hands pushing my arse and him reaching down and pulling me up. "Joe Lowry?" "Yes yes, that's me". "OK, put in ear". The wire is put in my ear and I hear a whirr of white noise and then a calm South Dublin accent. "Joe Lowry? You're on in 5-4-3-2-1...." 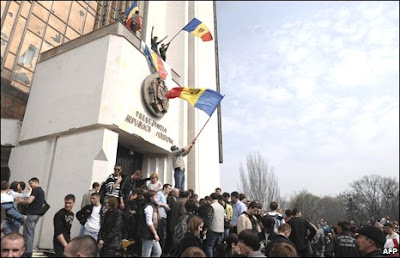 And I was so pumped, so up for it, so busting with adrenaline that I got through my first live TV spot without an "aaah" or an "uuuuh" or a "welllllll". Job done I hugged the little bearded Pole, thanked him for taking my virginity and high-tailed it through the melee to O'Briens, where I started to shake with the unspent adrenaline pooled in my blood. But the whisky stopped the shakes and started the songs. Quite a night was had, if I remember aright.

But back to Moldova. Here's hoping there's no bloodshed, and the result will be fair and transparent. The country has too many woes, too much bad stuff happening. Let this lovely little corner of Europe be spared violence.

Joe Lowry is our man in Moldova
Posted by Unknown at 5:19 PM