Swine Flu gets a High Five 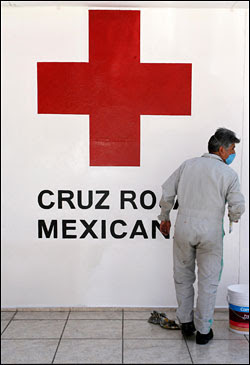 Whatever your view on Swine flu (which we now officially call H1N1) my reality is that it has taken up all my waking hours (and extended them) over the last week. I haven't had lunch since last Friday and there are journalists following this story with a dedication I have rarely witnessed. What is it that grips the collective imagination to such an extent? The Spanish flu of 1918 / 1919, which laid waste to an impressive 40 million people, is certainly a harrowing lesson of our time but really, how many people truly knew about it last week? (In fact, some accounts claim that as many as 100 million perished).
But how much has our world changed since 1919? How much has our world changed since 1999 for God's sake? Last night, at 22h00 Geneva time the World Health Organization (WHO) raised the global alert to level five. Again, people and journalists (often one and the same) who last week knew little about WHO, never mind phase four or five, are now providing sensational and, sorry to say, hysterical commentary.
What we really need, in my view at least, is a sense of perspective. At the same time I fully acknowledge we also need people to consider and plan for the worst case scenarios. And this is very much part of our daily modus operandi if truth be told. Disaster preparedness has to consider the gloomiest possibilities, else it will not work.
There is a human need to know the "what if" and the "worst case". If you doubt me just tune in to your nearest tv station and chances are it will be betting on millions of us falling about out of our minds on nature's latest toxic creation a.k.a. swine flu a.ka. H1N1.
Today at 14h Geneva time, we went to the international media to present our plans for scaling up and our sober analysis. Four Red Cross people talking to more than 50 journalists from Geneva's international press corps, including 6 different TV stations. Some even carried live on major news channels like Sky and repeated on a number of other major media afterwards. So, what did we have to say that is so different?
On one side we concur with WHO's analysis about taking the situation seriously - how could you not? On the other hand we feel calm and even confident. Never has the world been so well prepared for a global pandemic. We know that more than 70% of our national Red Cross and Red Crescent societies are already active, contributing to reducing the risk of pandemic in their countries. Next week this figure will most likely be closer to 100%.
And this is our niche. WHO provides the global guidance if you like, the Science. We, and many other governmental and civil society partners at the national and community level, carry out the much-needed efforts on the ground to drive the message home, coordinate efforts on the ground, deliver protective gear and advice and promote "respiratorial etiquette" (a wonderful phrase which I learned today - basically it means, don't cough in my face and I won't cough in yours).
It has been a real professional pleasure for me this week to be part of our crisis team, gearing itself up to support the global response of the international Red Cross. I have had the pleasure to work closely with some hugely experienced colleagues like Dr. Pierre Duplessis, our human influenza expert. Pierre is the former head of the Canadian Red Cross and has spearheaded our program to combat Avian flu over the last few years. A good guy to have in your corner, pandemic or not. 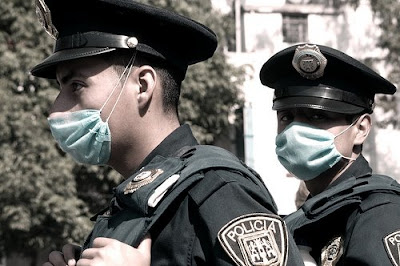 The situation has also provided an opportunity to reconnect with a former colleague, Marco Jimenez, in Mexico city, who has volunteered to report back for us and provide photographs so we can keep our worldwide network informed and provide some authentic images and stories to the world's media.
When I worked in Sudan, Marco was my handler in Geneva and plenty of sparks flew. That was 5 years ago or so and now our roles are somewhat switched - and this time we were hooked up through facebook.
There is no doubt that we are in a serious situation but we need to address it calmly, reassured in the knowledge that we have never been so well prepared. We have never had such early warning and early action. As far as I know all cases (more or less) have originated in Mexico and no more than a few dozen confirmed elsewhere. If we fail to prepare we prepare to fail - this is a truism and this is our thinking right now. And its Roy Keane's motto - and your a braver person than me if you take issue with his philosophy.
WHO is right when it advises that we are beyond containment. But we are absolutely not beyond mitigation and organizations such as the Red Cross will certainly make a massive difference in reducing the impact. Let's go about our business cooly and calmy, confident in our capacities to make a difference. Confident in knowing that we have learned some positive lessons from recent pandemic scares. Confident in our own common sense. Perspective is a good ally in such sensationalistic times.
Btw; for the latest updates on H1N1 around the world, I highly recommend the Veratect twitter feed - the first with the latest for my money: http://twitter.com/veratect
/PC
Posted by Unknown at 9:22 PM