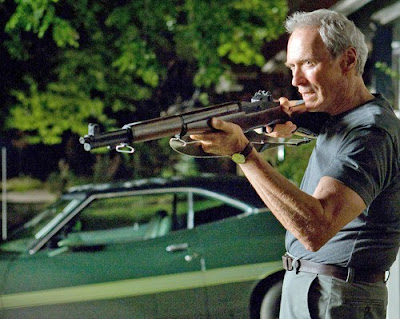 As long as you remember that it’s Clint Eastwood/ Dirty Harry/ Pale Rider on screen the denouement of Gran Torino does not strain credulity; otherwise how likely is it that six evil Asian gang members, in front of witnesses would open fire with Uzi sub-machine guns on an old age pensioner standing in front of their house on the possible chance that he might be reaching for a Magnum.

Perhaps in the sequel they will enter a plea of justifiable homicide for a Bush-like pre-emptive strike against an enemy who could have been carrying weapons of mass destruction but embarrassingly had nothing more lethal on his person than a Zippo lighter.

Defence counsel could also argue that they were ridding their community of a grumpy old working class racist who had confessed to at least one war crime in with dark hints that there may have been more.

Fat chance. These slant-eyed Hmong gooks as Clint, the recently widowed Polak vet,  describes them to titters from the cinema audience, had just raped a feisty young Hmong woman who lives next door to Clint and, as we know, from his filmography, there is nothing like the rape of a defenceless female to get Clint reaching for his shooting iron.

There is an arty hue to Clint’s latest take on his standard western narrative and in a neat reversal of audience expectations revenge is exacted in an early Christian-like way with a voluntary visit to the lions’ den resulting unexpectedly in the lions snacking on our post-modern Daniel. Self-sacrifice is part of the Hollywood American loner’s make-up.

Cars replace horses and the mean hombres are transformed into the street gangs that prey on the run-down neighbourhood flooded with Asian immigrants like latter day settlers moving out west. And Eastwood is the reluctant neighbourhood marshall doubling as the last “native” American of substance in the film, another curious role reversal reflective of demographic and cultural change in America’s inner cities, the bottom rung of an increasingly complicated social ladder.

Clint plays the part of the recently widowed Walt Kowalski, reluctantly coming out of retirement to protect a community under siege as he allows himself to be seduced by the exotic good neighbourliness of his Hmong co-citizens who have fled persecution in south-east for having collaborated with the Americans during the Vietnam War.

On the surface we are invited to identify with an emotionally damaged ex-Ford assembly line worker and Korean war veteran who upholds key American values to the extent that the plainspoken agnostic – pestered by a boyish priest who serves as a communication channel between the audience and Clint’s innermost thoughts - even abides by his dead wife’s wish that he make a confession. He also mows his lawn, keeps the Stars and Stripes flying from his house which is well-stocked with every kind of tool imaginable and no shortage of guns and bullets.

The not-so subliminal message is that white supremacy was not so bad after all. Clint succeeds in inculcating some white working class grit into the young Hmong teenager he saves from a life of mindless delinquency, murder and rape in Hmong gang circles despite the kid’s botched attempt to steal his treasured 1972 Gran Torino, symbol of his pride in working class American values.

The central place of the gun in American life is something Clint Eastwood has always exploited in an uncritical manner throughout his cinema career. Just because he gets ventilated by an awful lot of lead in what may be his valediction to the big screen, doesn’t mean he has had a deathbed conversion.

Much of the dramatic tension resides in wondering when he is going to pull the trigger. The film turns on the fact that he doesn’t pull his own but he pulls everyone else’s. The blood sacrifice is achieved in a climactic fashion. The National Rifle Association and the gun gods have been appeased.

P.S. There are 85 gun-related deaths in the every day. There are one million gang members in over 20,000 street gangs. There are 2.3 million people in US jails. More money is spent on prisons than higher education in States such as where Gran Torino is set.