The tragedy of Migration


The tragedy of the coast of Libya earlier this week when an estimated 300 would-be immigrants drowned while attempting to enter the European mainland was a stark reminder of this ongoing political and humanitarian crisis (some reports claim more than 500 drowned). It is also a signal that the calmer waters of springtime are paving the way for the so-called "season" of illegal migration from west and north Africa. 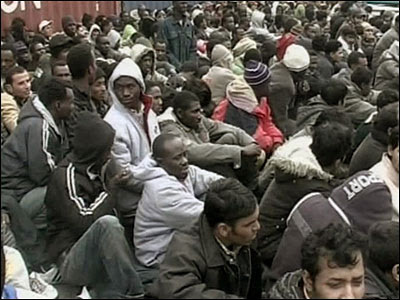 While researching a story for our website I came across the work of Spanish photographer Juan Medina (we used some of Juan's photos in our online gallery accompanying the webstory of the Libyan tragedy).

A colleague shared with me some photographs, taken in 2006 around the coastal waters of the Canary Islands. The images were so harrowing that neither Juan nor the Red Cross were eager to publicize them.
Illegal migration speaks of poverty, desperation and immense human suffering of the most vulnerable people in our societies. It is not even known how many people loose their lives each year attempting to chase a better quality of life in Europe (the Migration Policy Institute estimated that more than 2000 died attempting to move illegally to Italy from north African in 2004). And it is not a uniquely European issue - illegal migration is global, as pervasive in Asia and the Americas as it is in Africa or Europe.

One of the real tragedies of illegal migration is that it is often characterized by an unending downward spiral of hardship and rejection at each and every step. The hard economic realites or violence that drives people to uproot and leave their home communities. The dangers and difficulties they encounter in transit. Their vulnerability to people traffikers. And rarely of course do problems disappear when migrants arrive at their destination of choice. Here they can fall victim to ghetto poverty, human rights abuses, racial violence, extortion or worse, much worse. Sucked into a cycle of poverty, often without recourse to the protection of the law.

Migration is, at the end of the day, a global phenomenon and an enormous humanitarian (and political) challenge of our era. The world is on the move like never before and many people are willing to risk their very lives just to aspire to basic dignity and hope.
I embedded in this post a youtube video of the work of Juan Medina. Please watch it. He is a rare voice and advocate for these near invisible migrants who epitiomize a human tragedy on our doorstep and in our midst. And his images speak more than my words ever could.