Ducking and Diving; or when Black & White is anything but 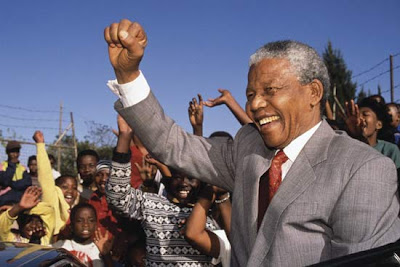 Although I was teased for having a crush on a Nigerian girl in kindergarten, my first brush with the politics of race in (then) 99.9 pe rcent white Ireland was a “Smash Apartheid” poster on my mate Richo’s bedroom wall in the late 70s.
It was a picture of Nelson Mandela’s head being squeezed like an orange, a reference to the Dunnes Stores strikers who refused to handle South African fruit. A decade or so later I was fortunate enough to meet and interview the likes of Kader Asmal, later to become foreign Minister under Madiba’s first rainbow government, and John deCourcy Ireland, for the best part of six decades in public life a beacon of tolerance and internationalism in a very introverted little nation.

I found myself thinking of them in the strangest of locales last week – 18 metres under the Aegean sea off the coast of Turkey. It was a rare moment away from work, family, the internet and the mobile phone. Apart from the obvious attractions of diving – seeing the fishies in their own environment – the floaty disconnect and the surge of fine oxygen gets the brain ticking.

In diving, colours are muted by the light-filtering action of water. But in terms of politics, there is only black and white for us humans under water. One leader, one set of rules. When you are down to 50 bar, it’s time to surface. Thumbs up means ascent. Two fingers against the mask means look. Nothing else. No finesse, no nuances, no discussion, no being clever with words.

And there, under the water and face-to-face with a Moray eel I wondered what Asmal and deCourcy-Ireland would have made of Sarkozy saying “African man has not entered into history” in the home of Youssou N’Dourr without getting kicked in the Dakars? A “not very intelligent” remark if I ever heard one, as the wee man himself may have said. (Will readers forgive my ironic slight on his Frenchness and his vertical similalry with Napoleon? How sophisticated are you headdowneyesopeners?)

Yes, I was in Durban in 2001 (see here for the company line and here for as close to the wire as I could go). And even though I was impressed by our former president Robinson and her obvious commitment to Ubuntu, I was perplexed and a little disgusted by the professional Israeli and Palestinian protestors who seemed to be acquainted a litle too well and to be almost preening as they shouted one another down for the cameras.

And here we are again, with the son of an African man making history, yet we are resolutey unable to separate religion from race, race from politics, politcs from religion. Let me attempt to clear the muddy waters. We enter the world as innocents, in only our skin. Politcs and religion we choose, (or they are forced onto us) but into our skin we are born. The darker that skin, the deeper the racism, the less the opportunity.

This is a self-evident truth for me, and I am sure for the many, many delegates who attended Durban 1 and 2 with our naïve little notion. A great Red Cross boss I had years ago once hauled me over the coals because I used the phrase “race discrimination” in a report. “We are all one race Joe,” she told me. “The human race.”

Sounds a little too hippyish and poncy aid-worker to you? Stop reading now if that’s the case, because I’m going to quote a poem that we hung on the wall of the GOAL house in Mogadishu in 1993 and which survived the UN’s bombardement.

I can’t recall it all, and it’s not on the net, but it went something like:

“When you are hot you are red.

When you are cold you are blue

When you are sick you are yellow

When you are envious you are green

When I am hot I am black

When I am cold I am black

When I am sick I am black

When I am envious I am black.

And yet you call me coloured.”