Still living with the fall out 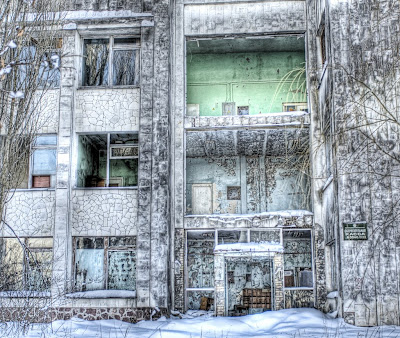 “That explains the hairstyle.” The almost inevitable response when I tell people outside of Belarus, Ukraine or parts of Russia that I’ve been to Chernobyl four times. (I’m bald as the proverbial coot… although I never understood why a coot got picked on. The Russian, bald as a knee is a lot more accurate. But I digress).

Four times I’ve stood next to “it”, the remains of Reactor number 4, which exploded with the force of a hundred Hiroshimas 23 years ago this month. Last week I was rattling the collection box/banging the drum for the Red Cross Chernobyl programmes (yes, there are still many needs) when I found myself saying that Chernobyl is an icon, the explosion (or the first cognizance of it) a generation-defining moment, like the Kennedy assassination for my older pals, or 9-11 for my younger ones. 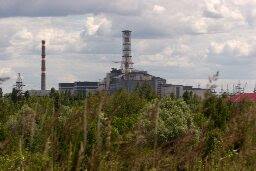 The fact is, 23 years ago hundreds of tons of radioactive material was spewed into the atmosphere (I tried to write “puked”, and “vomited” but it looks too gross. “wet-farted” would be le mot juste, but let it be spewed).

Radioactive iodine, with its half-life of eight days, did it’s work and then literally faded away. In those eight days, millions of thyroid glands in the affected region – no one knows exactly how big that region is, but we work across half of Belarus, much of west Ukraine, and the bordering region in Russia, covering seven million people – sucked in an invisible time bomb.

Years went by and then the thyroid woke up, and started doing thyroidy things, like announcing puberty. And then the radioactivity ingested (sucked, gobbled, imposed) in the week beginning 26 April 1986 did its thing and started to show up as nodules and cancers.

Now, 19 years after we started screening, using mobile labs that can boldly go where no other endocrinologist goes, we are finding 200 cancers a year (that’s one every day the teams go out to work) and the science suggests we are entering a peak. If one case of cancer a day doesn’t sound like much, consider this: there were NO thyroid cancer specialists in the region before 1986 and thyroid cancer was rare as rocking-horse droppings. It was almost never seen in young people – now it’s cutting a scourge through a cohort aged from 23 to 60.

And that’s one cancer, from one radionuclide. Let’s not even talk about the hundreds of tons of strontium cesium or plutonium which will be with us for the next… oooh… 23,000 years. No, let’s not talk about that, especially if we are “the international community” which aims to “minimize” the effects of the Chernobyl disaster. Don't forget that nuclear power is big big business, and Chernobyl ("couldn't happen today", "safe clean and cheap don't you know") is an inconvenient reminder of what happens when the fuel rods hit the fan.

Now, can someone explain to me how nuclear weapons – clean or dirty - can be developed without nuclear power as we currently know it?

Joe Lowry blogging from Chernobyl for 'Head Down Eyes Open' 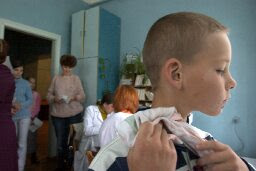 The photo above shows a young boy being screened for unusual nodules or thyroid activity. One of the most positive features of the International Red Cross's Chernobyl Humanitarian and Relief Programme is that it reaches places where the local authorities have few facilities. As such, it provides vital moral support. In the picture above the Mobile Diagnostic Laboratory (MDL) has come to the tiny Russian hamlet of village of Medvedovo, some 140 kilometres from Chernobyl but right in the middle of the path taken by the radiation cloud. The previous photo is of Chernobyl's nuclear power plant as it looks today and the first photo at the top of the post is of an abandoned school inside the 'dead zone'.