Stuck in Reverse (all the way back to Square One) 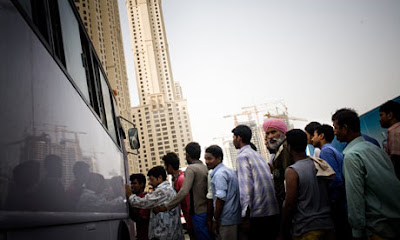 About two months ago, on the phone with my friend Joe who lives in Minsk (and now a regular contributor to Head Down Eyes Open), we threw a lot of ideas about on the subject of migration and how the financial crisis was exacerbating the problem. In fact, if we talk about migration, be it regular (legal) or irregular (illegal) economic boom and bust are two sides of the same coin.
Booming economies are like magnets for those in search of a better life and failing economies create the push factor, sending cheap and easy labour back (against its will) to where it came from. This is the scenario we discussed and later posted a story, researched by Joe, on the scourge of trafficking in eastern Europe. Soon after, another story, on the same issue, was posted, after several hundred migrants drowned off the coast of Libya in a failed attempt to reach the promised land of Europe.
What came out of that conversation also was the growing realization that 'reverse migration' could soon top the humanitarian agenda - a direct product of the global financial crisis. This manifests itself in the hundreds of thousands of central and eastern European migrants that have toiled in the building sites and hotel rooms of Ireland, UK and western Europe are now being involuntarily pushed back to Moldova, Ukraine, Belarus and other such hard-hit locations from whence they came.
"Apart from the obvious, do you know what this means?" Joe asked, "Tell me" I answered, knowing better than to second guess our man in Minsk, "a business opportunity for people traffickers" he said. And of course, he's right. Young men and women, especially women, forced by recession-hit (recently booming) countries to return to economically-deprived regions will be exposed to the lying lure of people traffickers, offering prospects and prosperity in Russia or the Gulf or wherever. Trafficking - the bastard child of migration.
And reverse migration is not just a European concern or phenomenon. In the state of Kerala in India, it is estimated that some 90% of thier migrants have ended up on the construction sites of Dubai and the Gulf. This region has been particularily badly hit and, according to Kerala's finance minister, Thomas Isaac, quoted in India today, more than half a million are expected to return in the next two months. They will return in debt to the money lenders who sponsored their speculative soujourn to the Gulf in the first place. They will return to seek work that is not there. They will return in frustration with their faded dreams, back to the dreary daily drudge of poverty.
China's internal migration is now also stuck in reverse and yet another phenomenon well underway. Its global factory is shedding its droves of workers, cost-effectively and efficiently, almost as if they too were products on an assembly line. 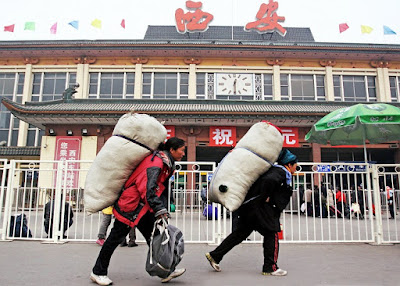 They sit in long rows, shoulder-to-shoulder, waiting for the trains that will take them back to their home provinces, to the places they once left for China's industrial east, lured by the promise of prosperity.
It's hard to put an exact number on this mass movement of people but it is estimated (under-estimated probably) at around 200 million. Some analysts believe many of these workers will be transferred to some of the massive Chinese infrastructural projects underway in Africa and the Americas - at the expense of local employment of course.
Remittances
The financial lifelines sent home by foreign workers are falling from Latin America to Central Asia. The drop has been so sharp in Kyrgyzstan for example, which relies on remittances for 27 percent of its gross domestic product, that the U.N. World Food Program was asked to rush in emergency food aid in November 2008 for the first time since 1992.
The Gulf stream of Indian migrants heading back to Kerala for instance will return to an Indian economy which, according to the World Bank, will already suffer a shortfall of $2.5 billion dollars in lost remittances from its migrant labour (India is the number one ranked country when it comes to remittances sending home some $45 billion per annum). You could quickly double that figure by estimating what the cost of support to return migrants might be for the state of India.
Migration, forward or reverse, and its economic companions such as remittances and money lending, is a deep and broad topic. What is certain is that the knock on effects of the financial crisis in Asia and beyond have been quick and multifaceted. Reverse migration potentially ranks as one of the more urgent and challenging issues to tackle. Apart from the obvious economic burden that will fall on those least equipped to deal with it, there is a fair chance that trafficking, economic deprivation and even civil unrest could also be predictable consequences.
There are many good analysis presented on the current financial crisis, best of which is probably in the Financial Times. For a different perspective however, I would also recommend a look at the excellent Spiegel in english.
/PC
Posted by Unknown at 8:22 AM