The Child Brides of Yemen

Immediately prior to the massive earthquake that hit Haiti on 12th of January, Head Down Eyes Open had started to focus on Yemen, a country that has found itself bang slap in the middle of the war on terror and the struggle for hearts and minds in the Middle East. One month on, Haiti has practically consumed our every waking hour. Both myself and Joe were dispatched to Haiti and hence the blog has been inundated with stories and posts from the striken region. Now, though Haiti undoubteldy still struggles, there are signs of recovery and the long road ahead is being chartered. We would like to return to Yemen before resuming the normal mish mash of musings from the margins. We would also like to take the opportunity to thank all of you who voted for the HDEO blog (a mere one year old this month) to be nominated for an Irish Blog Award. We really appreciate it and will continue as best we can to knock out more and better posts (and now tweets too) in the years ahead.
"I'd rather die than go back to him" - the plight of Aisha. 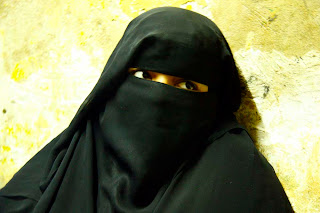 It was every little girl’s dream - she was to get a new dress, jewellery, sweets and a party for all her friends. (Photo, left, Aisha was 10 years old when she was married. Today, two years later, she is still hoping for a divorce).
What 10-year-old Aisha (not her real name) did not know was that after the wedding party she would have to leave school, move to a village far from her parents’ home, cook and clean all day, and have sex with her older husband.

“He took out a special sheet and laid me down. After it, I started bleeding. It was so painful that I was crying and shouting, and since then I have seen him as death.”

After a week of fighting off her husband every night, Aisha’s father was called. He had received 200,000 Yemeni Rial (US$1,000) for his daughter in `shart’, a Yemeni dowry, which he could not pay back.

“My Dad made a cup of tea and put some pills in it, which he gave me. The pills made me feel dizzy,” said Aisha. “My Dad told me to sleep with my husband, or he would kill me, but I refused.”

Instead Aisha broke a glass bottle over her head in a desperate attempt to stay awake. “My Dad hit me badly. I was bleeding from my mouth and nose,” she said.

After spending a few months in her husband’s home, where she said he would regularly drug her and beat her, Aisha managed to escape. Now, two years later, aged 12, she is unable to divorce him.

A bill passed in parliament in February 2009 setting the minimum age for marriage at 17 was rejected by the Islamic Sharia Codification Committee which said it was un-Islamic, according to local women’s rights organizations.

So, for now, there is no law protecting children against early marriages in Yemen.

”I don’t call it marriage, but rape,” said Shada Mohammed Nasser, a lawyer at the High Court in Sanaa. She has represented several child bride divorce cases in court, but admits she has lost most of them. Only a handful of child brides have successfully managed to divorce their husbands.

“The law on marriage stipulates that a girl should not sleep with her husband until she is mature,” said Nasser, which according to the law is the age of 15. “But the law is not enforced.”

A girl can be married at just nine, but cannot legally seek a divorce until she is 15 or older.

Just under half of Yemeni girls, 48 percent, are married before they turn 18, according to the Washington DC-based International Centre for Research on Women. This is classified as underage, according to the UN Convention on the Rights of the Child. 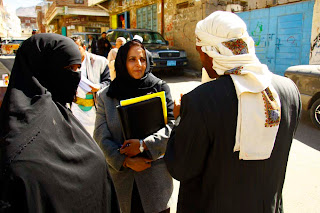 "The greatest problem facing Yemeni women today is child marriages," said Wafa Ahmad Ali from the Yemeni Women’s Union, which has long campaigned for a raise in the minimum age of marriage.

"These early marriages rob the girl of the right to a normal childhood and education. The girls are forced to have children before their bodies are fully grown instead of going to school and playing with other children," she said.

While politicians wrangle in parliament, young girls like Aisha are caught up in a violent world of adults which they are too young to understand, let alone escape.

”These are our traditions,” said Aisha’s father. However, he admits that Aisha might have been too young for marriage. Though she now has a lawyer, Aisha cannot divorce until the two men who control her (her father and husband) agree on how much money each will receive. (Photo, right, Shada Mohammed Nasser, a lawyer at the High Court in Sanaa, talking to the parents of a child bride outside court.)
What Aisha wants is clear: “I’d rather die than go back to him,” she said, wiping a tear from behind her veil.

This post and photos was based on an original report with our friends in IRIN.
/PC
Posted by Unknown at 8:30 PM