Today marks a new chapter in Haiti’s political history as Michael Martelly becomes the country’s 56th President. Waiting in the wings will be hundreds of international organisations and bilateral government donors, supported by millions of dollars of investments, looking to the new government to drive forward their human development strategies based on the fundamental tenets of economic opportunity and poverty reduction. These strategies, pledged in the wake of the devastating 2010 earthquake, will be critical to the physical and economic rebuilding of Haiti. 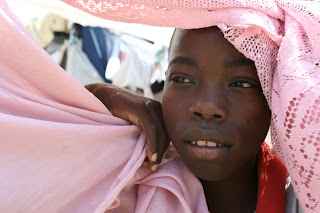 But as a new vision for Haiti is created, how can we ensure it is an inclusive vision which recognises the needs of the most vulnerable, 680,000 of whom are still living under canvas in camps in and around Port au Prince? What impact will a new government have on the work of the humanitarian community and how will it approach the difficulties which have held back the recovery process? The weight of expectation on the new government will be heavy, but now is not just a time to ask what the politicians of Haiti can do. We must all step up and push for a more effective way of working with local communities to support them in their recovery.
Make space available
This will mean facing the challenges with a sense of collective responsibility. The inevitable truth is that tens of thousands are likely to remain in camps and some larger camps are likely to become permanent settlements, shantytowns or even slums. The Red Cross remains committed to providing some basic support but what is the long term strategy for the camp population?
Some people are in camps because they have no other option, some hope for better healthcare, some that they may get priority for shelter. But the simple fact is that camps will exist as long as people do not have a more viable solution. The Red Cross has provided over 8000 families with safe and improved shelter solutions, in addition to the massive emergency shelter programme which reached over 900,000 people, but we have been massively restrained by a lack of suitable, available, land. Creating incentives for land owners to make space available on the outskirts of towns in and around Port au Prince should be a government priority. 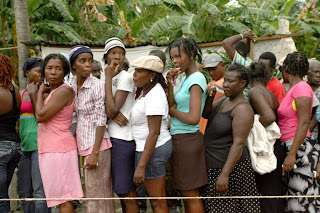 Priced out of the market
Estimates suggest 80 per cent of Port-au-Prince residents were renters or squatters before the earthquake and so large scale efforts to repair houses will be the cornerstones of transitional and permanent reconstruction efforts in the coming years. Yet too often we are hearing of houses being repaired only for rent prices to be hiked up by the owners meaning tenants are priced out of the market. Policies focused on protecting renters must be introduced, along with rent subsidies. Evictions are of huge concern and action must be taken, at government level. The interests of the overwhelming majority of Haitians who are tenants, not owners, must be safeguarded.
Community development is also needed so people have access to water, can take their children to school and have access to job opportunities. This requires community level engagement and the Red Cross, through its 10,000 strong network of Haitian Red Cross volunteers, is looking at all the services needed for a community to thrive. Urban masterplans must be rooted in local knowledge and we recommend the government empowers local mayors and authorities – recognising they are best placed to drive forward community level initiatives.
Abandoning the Parachutes
The humanitarian community must also improve, and commit to increasing collaborative working with government departments. Too many aid interventions have ‘parachuted in’ support and left, or have been unable to handover to the authorities. Having provided over 250,000 people with safe water each day the Red Cross is currently finalising an agreement with DINEPA, the Haitian Government water agency, to hand over Red Cross water trucks and support with capacity building and training of staff. This type of transition must happen more quickly and more often.
Much has been achieved by the humanitarian community in response to the earthquake, but expectations that Haiti’s problems will be resolved by humanitarian assistance alone are unrealistic. The current political transition must act as a catalyst for a reinvigoration of aid efforts, supported by a closer way of working between the Government, multilateral and bilateral aid agencies, NGOs, the Red Cross and – most importantly - local communities. Well funded and coherent development strategies, backed by a stable, transparent government, have the potential to create a positive and lasting impact for the lives of many. But improving the lives of the majority must not include overlooking the needs of the vulnerable minority. Measures must be put in place now to protect and empower these communities, so they have a chance to play their parts in the development of Haiti’s future.
/PC
Posted by Unknown at 4:17 PM