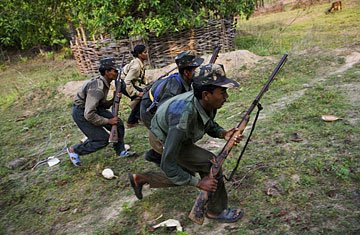 India - land of staggering beauty, diversity, economic growth, technological innovation, Bollywood, yoga, Ganesh and ..... Maoist revolutionaries. Maybe not much is known or written about this latter aspect of Indian society but it is a story worth telling and following.
This weekend elite Indian paramilitary units, known as CoBRA, were dispatched to Lalgarh to quell a spreading Maoist insurgency in the state of Bengal in eastern India.
The Maoist insurgents are known as Naxalites, named after the small west Bengali village of Naxalbari which was the setting for a violent communist uprising in 1967. They have a major stronghold in Lalgarh, less than 100 miles from the sprawling Indian metropolis of Calcutta. Shockwaves are now rippling through the political extablishment as news comes out that that the army's special forces have failed in thier mission to oust the Naxalites.
A combination of rebel fighting, sabotage and civilian demonstrations forced the CoBRA to turn back and regroup some 30kms outside Lalgarh. “Naxalism” now affects some 180 of India's 630 districts—a “red corridor” down a swathe of central India from the border with Nepal in the north to Karnataka and Kerala in the south and covering more than a quarter of India's land mass (see map at end of post).
For Indian government officials it is no longer possible to ignore that Naxalite cadres have cut deep into India over the last forty years or so and are now beginning to hold sway in areas dominated by deeply marginalized, landless and impoverished communities. Naxalites claim to fight a "people's war" and advocate for Maoist staples such as equal distribution of land, abolishment of abject poverty, education for all and ridding local government of corruption. Given that India is home to one third of the world's poor, the Naxalities have quiet a potential constituency. 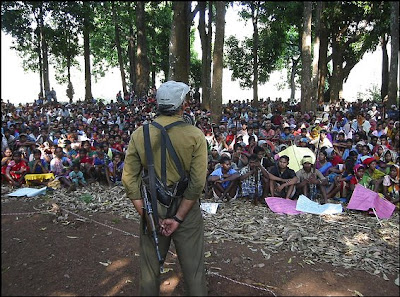 More civilian deaths than even Kashmir
According to the Asian Centre for Human Rights in New Delhi the Maoist violence between 2004 and 2008 claimed 1'965 civilian lives; compared to 1'195 in the northern wartorn region of Kashmir during the same period.
The rising toll of casualites and the growing geographic spread spurred Indian PM, Manmohan Singh, to label the Naxalities as "India's biggest internal security challenge ever". In the same breath Singh shocked many by confirming that the insurgents now control approximately one quarter of Indian territory where government administators are absent or banished or both.
Last week, M.L. Kumawat, special secretary for Internal Security, gave an interview in which he reported that Maoist rebels in India are rapidly expanding their insurgency and could move from remote rural areas to cities. The rebels are estimated to have 22,000 armed fighters.

Equipped with automatic weapons, shoulder rocket launchers, mines and explosives, the Maoists last year carried out at least 1,000 attacks, but most of these were in remote jungles and villages. The Naxalites also control some of India's mineral-rich areas and operate in large sweeps of the eastern, central and southern countryside.

At the time of writing the Indian army and its special forces are camped in west Bengal reviewing tactics and drawing up new assault plans. The effectiveness of the military option to uproot the Naxalites and address the cause of their grievances is questionable of course, but neither can real development take hold if government officials have no access to Maoist areas of control. Meanwhile, yet another 'quiet' conflict simmers in India. Dialogue anyone?