Droning on, the Cubicle Warriors 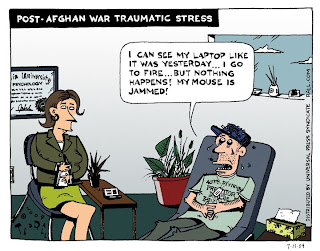 War is peace, the party said, in Orwell’s prescient 1984. My first reaction when I saw Obama had won the Nobel peace prize was one of satisfaction, that this man of relative peace (compared to his predecessor) had been honoured, perhaps too soon, but honoured nonetheless. I was a bit peeved for Morgan Tvangirai, a mighty man if ever there was one, but Obama getting the Nobel call felt kinda good, fluffy, warm.

But, as the New Yorker magazine reflected, Obama would probably have preferred to get the Olympics for Chicago as a present from the Skandies. “At least at the Olympics the judges wait till after the race to give you the gold medal. They don’t force it on you while you’re still waiting for the bus to take you to the stadium. They don’t give it to you in anticipation of possible future feats of glory, like a signing bonus, or an athletic scholarship. They don’t award it as a form of gentle encouragement, like a parent calling “Good job” to a toddler who’s made it to the top rung of the monkey bars. It’s not a plastic, made-in-China “participation” trophy handed out to everyone in the class as part of a program to boost self esteem. It’s not a door prize or a goody bag or a bowl of V.I.P. fruit courtesy of the hotel management. It’s not a gold star. It’s a gold medal.”

Let’s remember that this is a wartime president. And this war is unlike any war that has preceded it. The Obama administration, according to the New Yorker in a different article, has carried out an may unmanned drone strikes in ten months as the Bush administration did in its last three years.

Drones are unmanned planes, effectively missiles, that are being used more and more in the lawless and impenetrable “Tribal Areas” of Pakistan. Last March the US government allowed Pakistani authorities to nominate its own targets. 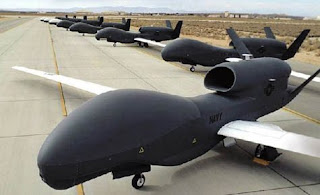 Now, while Drones are touted as deadly accurate, more so than dropping bombs (or for that matter packing a car full of semtex and just driving right at the target), according to the New America foundation (which has links to the New Yorker magazine) as many as 320 innocents have been killed by these American robots since 2006: http://www.newamerica.net/publications/policy/revenge_drones

And drones are working. Half of the top 20 most wanted Al Qaeda terrorist suspects have been taken out of service. But surely, the (presumably quite large) families of the 320 innocents are at risk of being radicalized when they see their loved ones vaporized by … well, by whom?

The New Yorker says that the job of piloting these missiles halfway round the world is, wait for it, outsourced. The joysticks are being wiggled by civvies sitting in cubicles in Bartfark Ohio (or maybe not even in the US at all, maybe in the Drone pilots equivalent of a call centre in Chennai, “hello, this is Raj, who can I help you kill today?”).

This makes for interesting dilemmas for the rules of war. Back to the New Yorker: “If the United States can legally kill people from the sky in a country we are not at war with, other countries will argue they can do the same thing.”

The cubicle warriors could be considered by international law to be engaged in warfare, when, viewed from the neighbouring cubicle, they are just jiggling an Xbox.