"They love us at night. They hate us the rest of the time”

In the run up to World AIDS day on December 1st my colleague, Jean-Luc Martinage, has been busy putting together a report highlighting the extent of the pandemic in Latin America - a region not normally associated with HIV/AIDS. The report was released yesterday together with a number of web stories about the lives of people living with HIV/AIDS. Head Down Eyes Open would like to feature one of these stories here. 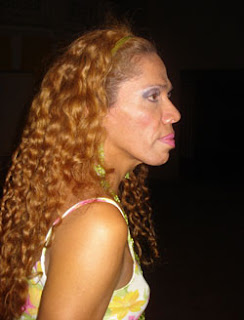 Her name is Pamela. She is one of the dozens of transgenders selling their bodies in what the locals call “Calle del Pecado” (The street of the sin”) near the historical centre of Cali, Colombia’s third largest city.
We meet Pamela at a snackbar near the place she lives. “Housing is one of the first problems transgenders like myself keep facing”, Pamela explains. “Nobody wants to rent a flat to a transgender”.

Even if she officially became “Pamela” only a few years ago, since the age of 6, the boy that she was at that time immediately felt that he was different from the other boys and wanted to be considered as a “she”.

From stylist to sex worker

Pamela became a stylist and a hairdresser. However, she had a serious accident that left her slightly disabled and she could no longer do her job. “At the age of 35, I became a sex-worker”, she explains, telling us also about the long legal battle she had to face with the authorities to allow her to change her name to Pamela. “The civil servant who received my request just laughed at me and said he would never allow such a change”, she recalls. However, she took the matter to the Supreme Court who finally allowed her to change her name to Pamela. But on her identity card, she is still considered as a “male”. Pamela had thought about a change of sex but she gave up when she was told she was told that after all she might not be allowed to have surgery despite living as a woman for at least 10 years and having faced dozens of medical and psychatric appointments.

However Pamela kept her fighting spirit by creating a network of support for all transgender people. From just a dozen at the beginning, her small NGO called “Transmujer” now gathers around 700 people.

Tripling the price for unprotected sex

“We need to help each other because we are faced with a high level of stigma and discrimination” says Pamela. “Men love us at night but they hate us during the day”, she sums up, explaining how besides being insulted on the streets, they also need to face numerous requests from men ready to triple the price to have unprotected sex. “I always say “no” because I am fully aware of the danger of being infected by HIV and other sexually-transmissible diseases. However, some transgenders need money so badly that they say “yes”, putting themselves into a highly dangerous situation.”

“Most of my customers are actually heterosexual men”, she says, “so in a way we are sometimes even more protected than our costumers’ wives who have no control at all on their own sexuality. I have seen terrible things like a girl who was providing sex without condoms against money while she was already infected with HIV. I managed to convince her to finally use condoms but my other concern is especially to make sure that transgender people who are not infected don’t catch the virus through unprotected sex”, she adds.

Pamela fought very hard to get access to condoms she could distribute to the other transgender sex workers. However, she never managed to have her status as an activit fully recognized. A while ago, she held a sensitization meeting in Cali and it happened that a Colombian Red Cross volunteer attended. The connection between her NGO and the Red Cross was quickly established and they are currently developing projects to provide a better access to condoms, to promote safe sex and voluntary testing as well as developing new prevention tools.

Working with the most vulnerable groups

“We won’t have a lasting impact on HIV infection if we don’t reach the most vulnerable groups such as the transgender sex workers,” says Dr. Yacid Estrada, coordinator of the Colombian Red Cross HIV programme. "Not only we will try to support Pamela in her prevention initiatives but we are even thinking of developing specific tools that will take into account the specificities of transgender sex. By doing this, we are in no way encouraging sex work but we believe no lasting breakthrough in reducing HIV infection can happen unless we take care of people such as transgenders who are highly affected by stigma and discrimination".

When asked how she sees her future, Pamela remains quite vague. She would like to become a full time activist for her community but her status is still not recognized by the authorities.

But for the time being, Pamela is back in the “Calle del Pecado” facing an uncertain future. With several packs of condoms she can share with other sex workers who now are even looking for her at night since they know she has a better access to condoms.