Beyond cholera - catastrophe looms in Zimbabwe 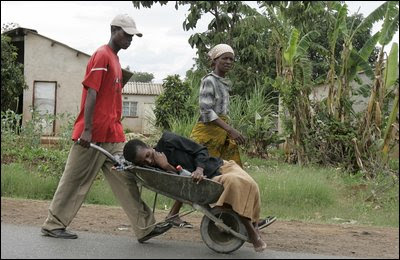 Zimbabwe is to the forefront of our concerns today. It is my third post on the crisis in a week. Yesterday, both the International Red Cross and the World Health Organization issued new updated reports. The prognosis is deadly. The WHO is now estimating a worst case scenario of some 110'00 cholera infected people in Zimbabwe in the coming weeks. This is revised upwards from 60'000. Almost 3'800 people have died to date.

In early December the figure was around 500 and hopes were high that it would not pass one thousand fatalities. Those hopes were based on an assumption that the international community would reach into its pockets and come up with the relatively insignificant sum of U$10m to arrest cholera in its tracks.

Despite our best efforts our operation is only 45% funded and as the report starkly states: This operation remains dangerously underfunded, and is at risk of being significantly scaled back at a time when it is clear that humanitarian operations in Zimbabwe need to be on the increase.

Despite the worrying rise in cholera cases we know we are having an impact in certain communities where infection rates are falling by some 5%. But cholera has taken root in rural areas making it difficult to contain. In fact, more than 60% of fatalities are in rural areas - it is our opinion that many of these deaths occur simply because people do not have the fuel or transport to reach the health centers that can cure them (the photo in this post for example shows a woman suffering from cholera being taken in a wheelbarrow to a clinic in Harare).

We are now working on a new and even gloomier scenario and aim to publish our findings by next weekend. WHO's expert prognosis states that more than one hundred thousand people will now be infected. However, this does not take into account compounding factors such as floods, HIV AIDs and a widespread lack of food. Our report will take these additional factors into account and will not make cheerful reading. The situation is spiraling out of control despite the fact that it should be relatively straight forward to contain - if sufficiently funded.

This is an all too common dilemma faced by humanitarian workers - can we really speak about 'scaling down' because there are no funds? Can we really abandon our hard-working colleagues in the Zimbabwean Red Cross? Can we simply turn our backs on the long-suffering people of Zimbabwe because of paltry funds? Can we really do this at a time when we are starting to roll back cholera? Do we retreat now when we have precise information at our fingertips that clearly indicates the situation could edge towards a catastrophe that goes beyond Cholera - that goes even beyond the borders of Zimbabwe? Do we really live in a society that bails out billionaire bankers with tax payers money and turns a blind eye to the humanitarian imperative to prevent more unnecessary deaths in Zimbabwe?

By way of conclusion I should acknowledge the sterling efforts of many Red Cross and Red Crescent Societies around the globe who are demonstrating true solidarity with the people of Zimbabwe during these dreadful times and doing their utmost to rally support and raise awareness. Our report lists all the donors to date. I was particularly delighted to see my own national society, the Irish Red Cross, announce yesterday that it is doubling its funds towards curbing the cholera crisis in Zimbabwe.