Bring out your Dead 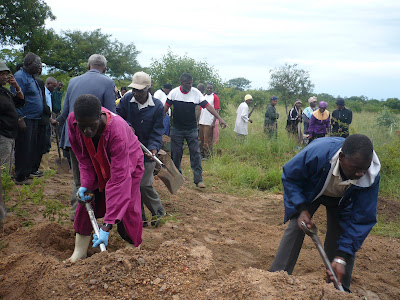 You know a country has reached the bottom when its dead must suffer the indignity of mass burial because funeral costs are out of reach.

Unemployment is calculated at 94 percent and more than half the population survives on donor food assistance.

The mortuary crisis has become so acute that on Valentine's Day - 14 February - the Bulawayo Residents Association (BURA), together with churches, businesses, funeral parlours and the Zimbabwe Prisons Service (ZPS), conducted a pauper's burial for 65 people whose bodies had languished in the city's morgues for over six months.

A simple wooden casket is priced at between US$350 and US$400, a sum beyond the reach of nearly all Zimbabweans. Read the full story.

This illustrative story joins a littany of others, just as harrowing. It would have been unimaginable only a few years ago to envisage such a precarious situation for Zimbabwe. Once the breadbasket of the continent it is now fully reliant on food aid, struggling to combat cholera and apparently experiencing an economic self-destruct.

The cholera crisis is a manifestation of a more fundamental humanitarian challenge underscored by food insecurity and the complete collapse of the health system. The President of MSF, Dr. Christoph Fournier, has just visited Zimbabwe and had this to say:

"The cholera outbreak, even if it is still not under control, is just the visible manifestation of this whole crisis," Dr Fournier added.

"Governments and international agencies must recognise the severity of this crisis and ensure that the provision of humanitarian aid remains distinct from political processes.

"Their policies towards Zimbabwe must not come at the expense of the humanitarian imperative to ensure that malnourished children, victims of violence and people with HIV/Aids or other illnesses have unhindered access to the assistance they need to survive." The full report of his visit plus a podcast is available on the BBC website.