Rebuilding Hope and Homes in Gaza 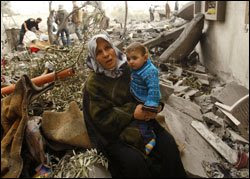 Next week, the powers that be, will assemble in Sharm el Sheik in Egypt to hammer out an aid package to rebuild Gaza. Three weeks (actually 22 days) of intensive fighting and bombardment left some 1300 Palestinians dead, about a quarter of them children. Israel declared a sudden and unilateral ceasefire and withdrew leaving stunned Gazans to pick up the pieces of thier broken lives and thier destroyed towns, villages, neighbourhoods and farms.

During the early days of the conflict which started on 27th of December 2008, I was constantly on the phone to several friends living in Gaza and in Israel itself (I had lived and worked in the region for two years until June 2008). For Gazans, in particular, it is important to understand that this was merely another escalation - albeit one of enormous magnitude and destruction - in the ongoing conflict with Israel. For Israelis it was yet again another moment to rally around a military offensive and support thier troops, protect thier sovereignity and demand their right to live in security - nothing less could be expected.

Israel's right to self-determination is not a question for me but the proportionality of its 'legitimate' response to home made rocket attacks shocked even hardened IDF veterans (IDF is the Israeli Defence Forces). Indeed the head of the International Red Cross in Gaza in one of several tv reports stated clearly that Israel failed in its obligations to abide by international law, especially when it came to facilitating access to the wounded and dead. In a particularily shocking incident in Zeitoun the Red Cross came across starving children, lying by the bodies of thier dead mothers. The Red Cross had been prevented for days by the IDF from reaching them and exceptionally spoke out against the disrespect for its cherished neutrality.

The political repercussions of this latest round of conflict will become apparent in time. A possible positive was reported today concerning committments from the main Palestinian groups to work together for the unity and benefit of its people. On the humanitarian side, more than 4000 people are left with horrific injuries; infrastrucure - which prior to the military offensive was already delapidated - is now completely defunct; schools, hospitals and homes need to be rebuilt (it is estimated that in three short weeks 15% of Gazas buildings were destroyed). The UN already estimates that it will take U$2billion to rebuild Gaza back to even a basic operating level.

Almost 7 years ago the world deplored a similar scene as the West Bank was brought to its knees when a wave of suicide attacks inside Israel prompted the IDF to launch Operation Defensive Shield. This also took approximately three weeks and in that operation 500 Palestinians were reported to have been killed, 1500 wounded and some U$360m worth of destruction caused.

During this latest round of hostilities the facilities of the Palestine Red Crescent Society (PRCS) alone will cost some U$20 million to rebuild and replace. The PRCS is well-placed to assess the real needs and deliver where it matters. They are still the only organization present all over the Occupied Terriotories at the grassroots level. Lets hope the PRCS is given the means to get back on its feet and serve the people of Gaza as it has done for 40 years or more - if this happens at least some positives will come from yet another major donor conference aimed at pledging to repair the massive damage wrought by war.