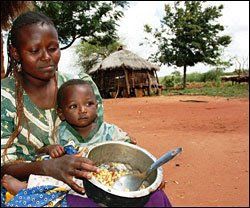 The Kenyan Red Cross takes preemptive action to stave off hunger in the drought-ridden east of the country.

Kenya is a country known mostly in 'the west' as a tourist haven and as one of Africa's better equipped economies. However, severe drought in the east has put as many as 10 million people at risk of starvation.

As written in an earlier blog such preventative action is not without risks. Donors are more accustomed to 'reacting' to emergency situations rather than trying to address causes before whole communities are decimated by famine.

Through its dynamic CEO, Abbas Gullet, the Kenyan Red Cross is working hard to create awareness and raise the required funds. They should be roundly applauded for addressing humanitarian needs in such a proactive fashion.

The International Red Cross is supporting its member national society on the ground and is scaling up its operations to address the chronic food security crisis in the Horn of Africa today where as many as 20 million people are considered at risk of starvation. Read this on the ground report by Anne Wanjiru, Titus Mung’ou and Andrei Engstrand-Neacsu in Yatta and Kiboko, east Kenya: