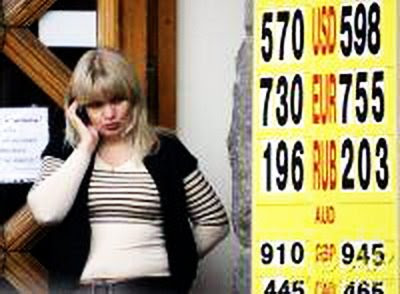 The photo (left) I borrowed from another blog. It depicts the Ukranian national currency, the hryvna, plummeting, amid a run on banks and soaring demand for foreign exchange.

Back in the heart of Europe, I am still reeling a bit from the economic doom and gloom that is all pervasive Stateside. I am haunted by all those sincere Americans who warned with certainty that Europeans had not fully woken up to the extent of the global financial crisis. It could be that the indulgent and reckless excesses of the US financial system are clear and solid indicators of the tough times ahead, but is there as much known or understood or shared at the European level about similar reckless behavior.

A number of leading European banks, mainly from Switzerland, Sweden, Greece, Belgium, Italy and Austria are dangerously exposed to the faltering economies of central and eastern Europe. Austria for instance is owed a whopping euro 230 billion by ex-Soviet bloc banks; that amounts to 70% of its GDP.

Stephen Jen, currency chief at Morgan Stanley, said Eastern Europe has borrowed $1.7 trillion abroad, much on short-term maturities. It must repay – or roll over – $400bn this year, equal to a third of the region's GDP. Hardly an option now that the credit window has slammed shut.

In Poland, 60pc of mortgages are in Swiss francs. The zloty has just halved against the franc. Hungary, the Balkans, the Baltics, and Ukraine are all suffering variants of this story. Foreign production has all but ceased in Romania and Bulgaria and industrial production as ceased in the Czech Republic. As an act of collective folly – by lenders and borrowers – it matches America's sub-prime debacle except that European banks are on the hook for both and US banks are not.

Almost all East bloc debts are owed to West Europe, especially Austrian, Swedish, Greek, Italian, and Belgian banks. In total, Europeans account for an astonishing 74pc of the entire $4.9 trillion portfolio of loans to emerging markets. They are five times more exposed to this latest bust than American or Japanese banks, and they are 50pc more leveraged (IMF data).

Spain is up to its neck in Latin America, which has belatedly joined the slump (Mexico's car output fell 51pc in January, and Brazil lost 650,000 jobs in one month). Britain and Switzerland are both heavily indebted in Asia.

"There are accidents waiting to happen across the region, but the EU institutions don't have any framework for dealing with this. The day they decide not to save one of these countries will be the trigger for a massive crisis with contagion spreading into the EU" according to Lars Christensen, at Danske Bank

The sums needed are beyond the limits of the IMF, which has already bailed out Hungary, Ukraine, Latvia, Belarus, Iceland, and Pakistan – and Turkey next – and is fast exhausting its own $200bn (€155bn) reserve. We are nearing the point where the IMF may have to print money for the world, using arcane powers to issue Special Drawing Rights.

And meanwhile, Ukraine's travails appear to be snowballing out of control after the central bank said the economy contracted 20pc in January year-on-year, with a dramatic 34pc slide in industrial production. Valery Lytvytsky, the bank's top adviser, said the collapse is the worst in recorded Ukrainian history, exceeding the darkest days after the Bolshevik revolution.

The currency has fallen 40pc since the crisis began, a crippling blow to companies with large debts in dollars or euros. Three banks have failed.

So we watch and wait as the lethal brush fires move closer.

Much of this article is based on reports from the telegraph, the Guardian's economic editor, Larry Elliot and from oil economist F William Engdahl.