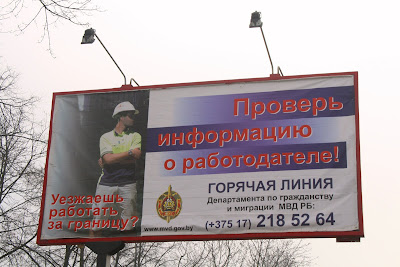 This new poster in the middle of the Belarusian capital Minsk encourages people at risk of trafficking to “know before you go” and warns: "Leaving to work abroad? Get information on the employer!"

Government officials and international organizations in Eastern Europe are warning of a dramatic increase in human trafficking as the recession begins to bite.

The number of victims of trafficking in Belarus is showing a steep rise already, according to data gathered by the Red Cross Red Crescent, International Organization for Migration (IOM) and local authorities.

More than 800,000 citizens of Belarus are “missing”, presumed to be working – voluntarily or otherwise - in Russia which has an open border with its smaller neighbour. In Ukraine - a transit, source and destination country for modern-day slavery - fears are growing of a new wave of emigration as industrial output shrinks (by 30 per cent since September). In Moldova, Europe’s poorest country, one quarter of the population has migrated and things can are set to get worse.

A recession brings new business opportunities for the traffickers, explains Lars Linderholm, the newly-appointed facilitator for migration issues in the International Federation of Red Cross and Red Crescent Societies’ Europe zone office. Migrants lose their jobs in western Europe and return home where a cold welcome awaits them. Eastern Europe’s nascent middle class, with its mortgages, car loans, and maxed-out credit cards may, for the first time, be tempted to migrate.

An advertisement in a newspaper, a friend’s story of foreign streets paved with gold, or a flyer in a nightclub can quickly trap the unwary into months of misery and degradation on a building site in Moscow, a brothel in the UK or backbreaking agricultural work.

Although IOM’s figures show that 99 per cent of people in this part of the world are aware of the phenomena of human trafficking, only 15 per cent think they are vulnerable – a precious state of affairs for the traffickers.

Work off the debt

Natasha, from Mogilev, Belarus’ second-largest city, has a typical story to tell. This articulate mother-of-four had recently become sole provider for her family, and decided to answer an advertisement to work in a factory packing frozen vegetables just outside Moscow. On arrival she handed over her passport and was informed she had to work off the debt she incurred to get the job.

At the end of a month working 16 hours a day, with three toilet breaks and one meal, sleeping on the factory floor, she went looking for her salary. She got nothing, except threats of sexual violence.

It was the same after the second month, when her health was starting to fail due to the intensity of the work and stressful conditions. “We escaped in a car we flagged down and I went home. The police ignored me, treated me like a whore and then a friend referred me to the Red Cross Red Crescent.”

The Belarus Red Cross, working with IOM and the authorities, provides a full rehabilitation service for trafficked persons like Natasha through its five “Hands of Help” centres around the country. When trafficked persons are referred to the centres by the authorities, they are given health checkups as well as psychological support, legal advice, addiction treatment if necessary, accommodation and vocational training to help get them back to work and reintegrated into communities whose first reaction is often to shun them.

The medical statistics speak for themselves: since 2006, 20 active TB cases were diagnosed (in just one centre), along with cases of syphilis, gonorrhea, HIV/AIDS and other sexually-transmitted disease (STD). Almost 90 per cent of trafficked men and women return with some sort of STD.

In Natasha’s case, the local Red Cross centre even got her into chemotherapy for the cancer that she developed shortly after her ordeal. “Who helped me? Only the Red Cross,” she says, tears in her eyes.

Now she’s back on her feet, a waitress in a busy local bar, and ready to volunteer for the Belarus Red Cross to prevent “others being as stupid as me”. She is full of ideas: public lectures, videos in schools, leaflets campaigns, a hotline: all things that local Red Cross chairman Andrei Nikitin would love to expand if he had more funds.

And Natasha has a whole new reason to be concerned. Her eldest daughter, an economics student, recently asked for permission to go to work in Moscow with “a friend”. Natasha told her the story of what mama was really doing in 2005, and the girl stayed home.

Psychologist Natalia Domarenko works at the Mogilev Hands of Help Centre. In January, she saw 17 trafficked persons in January, and she also expects the numbers to rise sharply now. Although 75 per cent of her clients are women, she estimates that an equal number of men and women are trafficked, with the majority of men duped into slave labour on building sites. (In Russia it is not illegal for an employer to retain someone's passport, nor is it illegal to employ private security to seal off building sites, keeping the workers inside).

“Women will talk, will share their problems”, she says. “But men don’t want to. Men have only one doctor: Doctor Vodka.”

Tatiana is another of her clients, an attractive woman in her mid-30s with an impish smile. She’s been home for 14 years, but is still recovering from her year-long ordeal when she was passed from apartment to apartment, man to man in Moscow. Her huge handbag stays clutched over her stomach the whole time we are talking and while her face smiles, the memories dart like demons across her eyes.

Like many 20-year-olds, Tatiana was looking for life, money and fun, and had heard stories from friends about the money to be made selling leather goods in Moscow’s markets. So when a friend of a friend put her in touch with a good job and free transport she didn’t think twice.

In touch with the Red Cross

“But as soon as I got to Moscow, and was put in that apartment I immediately understood the situation.” Eventually she took one of the few chances presented to her, and left. The police were kind, put her in touch with the Red Cross and now – long, lonely road travelled - she’s one of the top ten hairdressers in Mogilev, with an eight-year-old son who is the one and only man in her life.

As for the friend who went to Moscow with her? “I heard she got into drugs. She’s lost.”

Tatiana and Natalia are just two of the 500 trafficked persons helped by one branch of the Red Cross in one city, in one tiny corner of the continent. No one knows how many other men and women are living in torment, unable or ashamed to return, getting deeper and deeper into the mire of drugs, drudgery and depression.

While there is at least some worldwide data on trafficking of men and women for sexual and labour exploitation (although no doubt seriously under-estimated) there is almost nothing on child trafficking for labour, begging and sexual exploitation.

It’s a question that is disturbing Ana Ravenco, the president of Moldovan anti-trafficking organisation La Strada, which has worked closely with the Red Cross Red Crescent.

“We can’t find children via hotlines or information campaigns. Children don’t call hotlines. Once they are trafficked they are often gone forever.”

La Strada, IOM and the Red Cross Red Crescent all report a trend towards “soft” trafficking, where the “simulation of a safe environment” is used to lead people to believe they have choices and to make irregular trafficking look like regular migration.

One way to tackle trafficking (particularly in women and children), she believes, is to tackle domestic violence in all its forms – physical, economical and emotional. “I would say 100 per cent of [those affected] are also victims of violence. Once women have economic independence it is easier for them to get away from an abusive environment.”

La Strada is establishing a “trust line” for victims of domestic violence. Meanwhile, the Moldova Red Cross has just begun an information campaign to bring domestic violence out into the open. This is a good initiative in a country where a familiar adage runs “a woman who isn’t beaten is like a house that isn’t cleaned”.

Lars Linderholm is determined to put trafficking back on the agenda. “One of the most serious problems we face is lack of data”, he says. “That’s in terms of the scale of the problem, the actual response, and the potential the Red Cross Red Crescent has to be more involved.”

Lars sees trafficking as a problem for all parts of Europe, both on the demand and supply sides. He will encourage the International Red Cross and Red Crescent Movement to work closely with the authorities and with specialist organizations to inform, detect and rehabilitate victims of a crime that shames us all.

This article is written by Joe Lowry, IFRC representative for Belarus, Moldova and Ukraine and also appears on ifrc.org
Posted by Unknown at 4:52 PM