Floods in a Desert 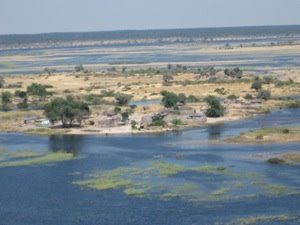 On 17 March 2009, as Ireland and Montserrat and the rest of the world celebrated Saint Patrick's day, the Namibian government declared a state of emergency in its northern flood-stricken regions. The President, Hifikepunye Pohamba, called on the international community for assistance.

Ninety Two deaths have already been reported and more than 276,000 people have been directly affected. This figure is expected to rise as more information comes to light.

There are real fears that an existing outbreak of cholera (in the Kunene region) could be exacerbated. Access to safe drinking water and sanitation facilities is very limited in the flood areas, and cholera and other such diseases could increase. There are also some warnings of a possible outbreak of malaria.

The floods have also caused extensive destruction to homes, schools, health facilities, agricultural fields, businesses and infrastructure. Wide-spread crop failures are expected, compounding the loss of any food reserves the communities may have had. Farmers are also increasingly worried about outbreaks of disease in their livestock. Many roads have been rendered impassable, and access to health facilities and schools has become very difficult, if not impossible.

The Namibian Red Cross Society has been assisting people who are being relocated to higher ground. This includes registrations, camp management, and provision of available relief materials, health and hygiene promotions and sanitation within the camps.

The Zambezi River Basin, which stretches from Angola to Mozambique, is affected annually by floods, bringing death and disease to those living along the river banks. Namibia, a largely desert-covered country, is not normally subjected to such extreme flooding.

The International Red Cross is appealing for nearly 800,000 Swiss Francs (USD 709,000) in response to severe flooding in Namibia, in the regions on the border with neighbouring Angola. 300,000 Swiss Francs (USD 253,000) has already been released from its Disaster Emergency Relief Fund (DREF) for operations in both Namibia and Angola.

The Emergency Appeal seeks to provide shelter, food, clothing, mosquito nets, clean water and sanitation to relieve the impact of floods for a period of six months. Clean water, sanitation facilities and temporary shelter are the most urgent needs since the majority of the affected people have been displaced from their homes and safe water has been contaminated.

In a real-time example of early warning early action, the Red Cross Disaster Relief Emergency Fund (DREF) released CHF 146,695 (USD 124,473, EURO 99,224) when unseasonal rains hit Namibia on the 11th of March, ensuring that the Namibian authorities and its local Red Cross society were ready prepared for the imminent flooding to which they are now responding.
Posted by Unknown at 11:04 PM