The Ship is Sinking 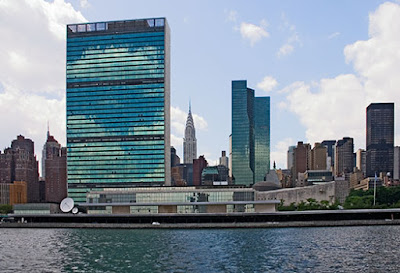 I am winding up a week or so of hectic meeting and greeting Stateside. Yesterday, I had my first visit to the UN headquarters on the banks of the east river. My guide, a veteran of the aid world and our head man in New York, regaled me with tales from the diplomatic frontlines. The president of the UN General Assembly had just declared starkly that "the ship is sinking" because of the financial crisis. There is a palpable feeling here that Europeans are not fully awake to the depth and danger that lies ahead on a global scale.

The latest assessments, pulling together data from a number of sources including the authoritative World Bank, estimate that we now have an incredible three billion people living in poverty. That's more or less half the world's population and it has more than doubled in recent years. The current crisis was of course preceded by a sudden soaring of food and fuel prices, to the extent that people rioted and died in Asia, Africa and the Americas.

Ban Ki Moon, Secretary General of the UN and a man with an acute understanding of the financial world, has called for a major international conference this coming June in order to have a global approach to minimize the humanitarian consequences that we know are certainly happening and will only escalate. World leaders like Moon are worried that the reality of domestic economic concerns will lead to a blinkered neglect of the big picture. Robert Zoellick, president of the World Bank is echoing similar concerns fearing that as developed countries focus on stimulus packages for their own economies and withdraw capital from foreign markets they may neglect to understand that developing countries also need to be protected so that we can work towards a complete global recovery.

Zoellick's World Bank report warns that 129 developing countries are facing an investment shortfall of 270 to 700 billion U.S. dollars this year and international institutions alone can not fill the gap. "This global crisis needs a global solution and preventing an economic catastrophe in developing countries is important for global efforts to overcome this crisis," he said. The fundamental lessons may be slowly learned as economists now believe that economic catastrophe may have yet to reach the developing world since the waves of the crisis have not entirely hit ashore from where they were generated. One to watch in this regard, among several vulnerable economies, is Ukraine.

The UN, in my opinion, is best placed to lead and partner on a global solution - especially in humanitarian terms - to the current crisis. Their June conference on the East River in New York will be a key moment in defining whether or not the community of states -- many of whom are genuinely reeling from financial woes at home -- can pull together for a global good. In the halls of the UN hq I took note of a quote from one of the more famous UN Secretary Generals, Dag Hammarskjold, who died tragically in a plane crash before he could complete his work. The quote resonates as much today as it did when he first uttered it at the dawn of the sixties: "Everything will be all right - you know when? When people, just people, stop thinking of the United Nations as a weird Picasso abstraction and see it as a drawing they made themselves." If Hammarskjold's committment and faith in UN institutions holds true in June maybe, just maybe, with all hands on deck, we can stop this ship from sinking.

(written in a real rush - plane boarding - in JFK NY).