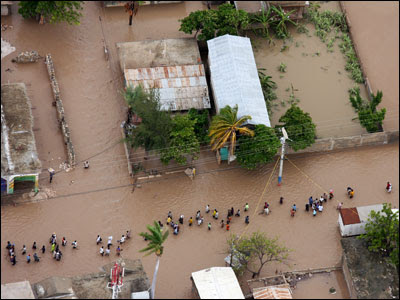 Last August, when I moved to Geneva I had a baptism of fire as hurricanes began to batter the Caribbean and ferocious floods uprooted more than 2 million people in the province of Bihar in India. These far flung time zones had me disoriented for days as we tried to support our colleagues doing the real work on the ground.

I remember in particular the tragedy that befell Haiti, and especially its northern town of Gonaives, as not one, not two, not three, but four hurricanes battered it in quick succession submerging the town in a square mile of mud upto 12 meters high. The story grabbed the attention of the world's media for weeks and the first pictures of the disaster came out from red cross cameras, helping somehow to raise awareness of the desperate situation being faced by a community under water.

Yesterday, in the IHT, in a great report from journalist Neil MacFarquhar, I felt a tingle of unease as I read about Gonaives today and the fear people feel at the hint of rain. I was amazed to hear that no evacuation plans are in place, no craft available to ferry people to safety and apparently little in the way of preparation or prevention. Have no lessons been learned from last year's tragedy (which was by no means the only one suffered by Haitians due to climate-related disasters)? As hurricane season is around the corner I hope there is soon a real effort on behalf of the people of Haiti to put in place safety measures before disaster strikes instead of merely running in with relief efforts afterwards. Someone told me that Haiti holds the largest UN presence in the world per head of population. I hope peace-keeping also includes protecting communities from the known disaster risks. I know its the poorest country in the northern hemisphere - this is, I assume, a reason to help and not a reason to be complacent. 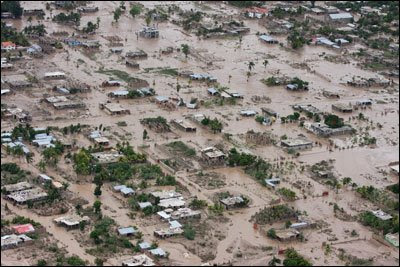 The photos in this post were taken for the Red Cross by Victor Lacken, writer, videographer and photographer.
/PC
Posted by Unknown at 8:42 PM