Waking up to the life-saving power of information 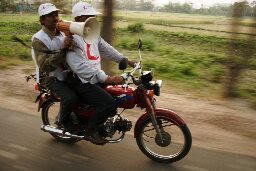 Timely, relevant information can spell the difference between life and death when disasters strike. Survivors need to know where health clinics have been set up or where food is being distributed. They need to know how to trace missing relatives, find shelter and get clean water. But in many emergencies, such information is limited for those who need it most. There is also a significant but narrowing gap in getting vital information, made possible through more accurate early warning forecasting systems, to communities at risk before disasters strike.

When an emergency situation breaks out people are often caught unawares. Typically, affected populations don’t know how to get help. They feel lost and abandoned and aren’t accurately informed of risks and health hazards. Rumours, myths and false information go unchecked, adding to the uncertainty and insecurity. People aren’t empowered to make good decisions and as such have no influence over the aid response. They are often omitted from the life-making decisions that directly affect them.

Important changes are however taking place in how communities affected by disasters are engaging with humanitarian organizations. Aid workers have long realized that people caught up in a crisis are not helpless victims but a potential first line of response and a potent source of local knowledge. The challenge has often been to effectively tap into this potential resource. At the same time, humanitarian organizations are partnering more and more with communities prone to weather-related disasters to put in place effective early warning sytems to minimize impact if calamity strikes. This is happening right now in countries such as Haiti, Mozambique and Vietnam.

Today, through a combination of traditional social mobilization, new media and better forecasting technologies, disaster-prone communities and aid agencies can better share and streamline information in an effort to ensure those who need it most get it first. Increasingly, populations affected by disasters are now empowered as those best-placed to help humanitarian organizations untangle the complexity of an emergency and to identify the most urgent needs in their communities.

In the tsunami affected area of Banda Aceh in Indonesia for instance the Irish Red Cross runs regular radio programmes based on thousands of phone calls, text messages and emails received from the local communitiy. This relatively low-tech service has not only proven to ensure a more relevant and effective response to the humanitarian needs as defined by the community itself but also holds the aid community and local authorities to account. It is a true two-way communication which promotes transparent, accurate information and places all participants on an equal footing. In time, humanitarian organizations will need to be every bit as accountable to those they are supporting and assisting as they are to those who provide funding for aid operations.

The days of viewing people caught up in conflict or disasters as mere “victims” are ending. Communities unfortunate enough to have to endure a humanitarian crisis should not be viewed as passive recipients of aid but people who need to be empowered as the first line of response. They need to take a central role in determining their own recovery; their engagement, through genuine grassroots communication, is the way to achieve this. It seems that aid agencies are finally waking up to the life-saving power of Information and treating it as a service and assistance every bit as valuable as wheat flour or tarpaulins.